Italy is an extremely beautiful country. Here you can find mountains, lakes, seas etc. I live in Northern Italy and I’m close to Central Europe. I can see Switzerland from the windows, I can fill cheaper fuel in Switzerland. The nearest skiing resort is about 1,5 hours drive away, about 2 hours I can reach the beach. Everything is close. 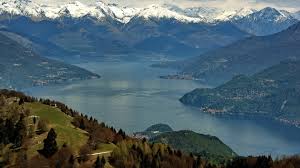 But there is no paradise without a snake. This week news are reporting about the chaos at Fiumicino airport at Rome. A disaster, there are persons that have waited for their flights for over 48 hours. My husband was there on Wednesday and he was supposed to arrive to Milan at 9.10 pm. He arrived home 3.30 am – the flight was first delayed, then it disappeared totally, then the crew had to be changed etc. Well, after what I have heard these days he was extremely lucky to get home only 6 hours later than supposed.

Then at Como there is the eternal project called “paratie” (bulkheads). The construction started 2008, the estimated cost was 15 millions. Now 2015 the cost is up to 27 millions and the project is not ready yet. There have been many malpractices and the worst is that nobody is responsible. This is so typical in this country – nobody is never responsible when there are problems.

Now you can ask why I still love this country and why I want to live here, the Italians can’t organize. It is always so complicated when the Italians arrange something. As a Finn I sometimes feel desperate when I see that something could be done in a much simpler way. But I have to admit that in the end usually things work – at least almost. Back to the question why I can live here. The answer is that here you live. Because organization is not the strongest point of this society you always have to learn how to do some simple things from scratch, because there is always some changes. The Italian health care system is fantastic, it really works well. Italy is famous for “la cucina italiana” –  therefore I struggle to lose any weight. The Italians love good food. Nature in Italy is beautiful –  mountains, the Umbrian hills and Mediterranean sea. I admit that people don’t seem to appreciate nature and unfortunately you can see so much garbage around, it is a shame!

The Italians are very friendly and helpful. Here you can always try to resolve the problems by talking, except when you pump into the most impossible bureaucrat in this world (usually you meet these persons at public sector). These persons feel that they are important and you have to show respect to these persons (even if they are total idiots sometimes). usually I have met nice authorities. Once a police wanted to check my documents, but this same police had stopped me 2 weeks earlier so I explained that I was in hurry and that he had stopped me just 2 weeks earlier – he excused and stopped the traffic so that I could continue my journey immediately. Or once financial police stopped me close the border. I explained that I have nothing, they checked the car and then documents. When they noticed that I’m originally from Finland they started to tell how one of them had been in Finland 20 years earlier. In the meantime a big, foreign truck passed us and from the custom in question trucks are not allowed to pass (it is not a commercial custom). The two policemen looked at each other and decided not to go after this truck, instead they preferred talking with me about Finland.

All these small things make me love this country and help me to survive with tax authorities and pay unfair amount of Taxes. As I wrote earlier there is no paradise.

Italy has one of the hardest taxation in Europe. I would estimate that Italy is among the top five when it comes to taxation. Sometimes this hardness is a bit exaggerated; as two years ago then I paid, I would say about 150% taxes. This meant that my husband paid my taxes. This situation aroused because that particular year my incomes as a freelance translator diminished drastically. Then I told my bookkeeper that it is ridiculous to pay all these taxes she replied that it is simpler to pay these taxes and then later on get them back. Due to this 150% taxation, I have had after that all the time credit to the state, so all my real estate taxes, VATs etc. have been paid by this credit.

A week ago, my bookkeeper called and informed that there are some problems with my incomes. In Italy somebody has developed „studi di settore“, this means that every year I am supposed to compile some papers and tell how many words I have translated, how many pages, how many hours I have worked, if my clients are Italian or foreigners and from which regions (if Italian) or from which country (if foreigners). Therefore, I have calculated the word amount based on my invoices. I know how much clients pay on average per word, so no problems. Now it resulted that with this amount of words authorities have decided that I have to earn certain amount of euros. Unfortunately, they estimate that my incomes should be double. Then they have also decided that if I work tot weeks a year I have to earn certain amount of euros. Somehow, I started to feel that in some aspects Italy is a totalitarian country. Anyway, there was this problem. To resolve it I could either stick to my numbers and then authorities would make a deeper investigation and the result might be that they anyway do not believe me and I should pay more taxes and some fines. The other possibility is that I sign a document, change my information that I gave in studi di settore, and agree that I pay taxes for double of the sum that I really earned. My bookkeeper said that this is better because in that way authorities do not start to investigate my business. Therefore, this year I pay taxes from my real incomes and then from ghost incomes.

This is the reason I want to change my work. Now I am seriously planning to shut my VAT number, because I cannot find any idea paying 100% taxes – last year actually I did not earn anything that I would not pay to the state. I am angry, frustrated and demoralized. Maybe it is better for the Italian state that I do not work and do not pay a cent taxes. The worst is that there are thousands of freelancers like me that have made the same decision. Then authorities wonder why in Italy there is so much grey economy. The grey economy is also the reason to my situation. Obviously authorities think that all freelancers try to hide their incomes and declare only a tiny part in the tax declaration. Actually I’m punished being honest, maybe I should really learn to act as the Italians. Anyway I think that my story as a translator has reached the end.

Italians love to talk about the weather. For the moment, we have here an exceptional heath-way that could last also 10 days. Due to these extreme weather conditions all the newspapers and news broadcasts all full of advises how to survive. Every year the same recommendations i.e. drink enough water, eat vegetables and fruits, stay inside during the hottest hours, and take special care of children, elderly persons and sick ones. 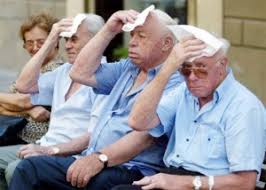 The Italians always claim that they are not used to winter conditions – even though here in Northern Italy we have winter every year. If the weather forecasts predict snow, a big theater begins. If it snows more than 3 cm snow, I stay home with kids. Anyway, it would take three times longer to get to school than normally. Once they closed the schools because the night temperature dropped to -12 degrees.

Considering the possibility that I survive the awful winter and see the spring coming, again I have to be careful. Even if the temperature is +20 in March you are not supposed to wear spring cloths, the Italians still wear they winter jackets and kids look like sweating small Michelin dolls.

Because the Italians look the calendar and not until the calendar says that it is spring they change to spring cloths. This applies to all seasons.